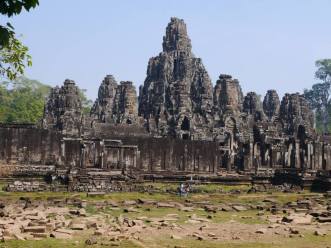 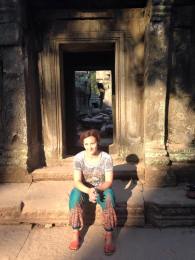 After an arduous and sweaty 8 hour bus journey from Vietnam, I reached the ever suffering country of Cambodia, staying in the capital Phnom Penh. I would describe it as a typical small South East Asian city; it’s neither hectic like Bangkok or Hanoi, nor serene like Luang Prabang or Hoi An. It’s certainly the visibly poorest of the four countries I’ve visited in Indochina. I saw the handicapped begging, dogs begging and unwashed kids roaming around with no shoes on. When I removed my Western rose tinted glasses, I realised that there were child prostitutes on the streets; it felt grubby and it made me question the morals of particular tourists.

Throughout my Indochina trip I was repeatedly told by my guide and other local guides to be respectful, to dress modestly and not to touch people. Yet people frequently touched me. I’d been poked, tapped, tickled, my face touched, my cheeks pinched and even my bum slapped by a small child! My pal Emma had her chest groped too. In Cambodia I saw lots of pervy eyes eyeing me up and local guys were taking photos of Emma and me as we walked around. It made me feel really uncomfortable and also angry that the respect I gave to them and their culture was not reciprocated. Ok, rant over. It’s just something for travellers to be aware of, especially women.

My group had pre planned a cyclo tour of the city and the money you pay is essentially a donation to a local charity. Basically, you sit on a single seat whilst an old man cycles you around the different sites. I felt like such a lazy cow because I like to walk everywhere, but I only agreed to it because the wage gives the men a livelihood.
Another charitable cause whilst in Phnom Penh was lunch at a restaurant run by a non-profit charity that take young people off the streets and train them in hospitality. The food and service was top notch, so it’s working. It makes flashpackers like me feel philanthropic anyhow! 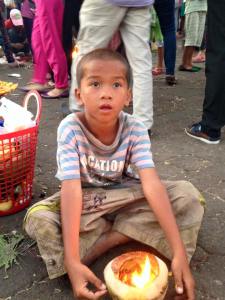 As evening drew in, I visited a tiny shrine next to the river where hundreds of people had gathered to make offerings of heady cinnamon incense, pretty pink roses, flaming coconut shells and red glowing candles. As the sunset burned over the dark silhouette of the nearby Royal Palace I happily mingled amongst the crowds and drank in the scene. 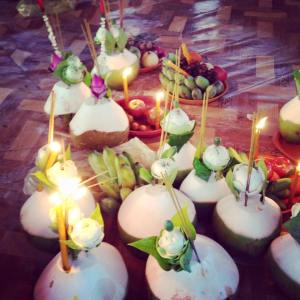 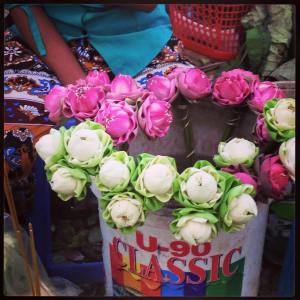 The night ended with copious lychee martinis and a hunt for the best music in town. I had to explain to tipsy Emma that the friendly girls outside of ‘Pussycat’ bar were in fact strippers ready to hustle us, haha! We found the local backpackers hostel which had a gorgeous roof terrace and enjoyed the laid back vibe.

Killing Fields
I finally learned the facts about the torture and mass genocide of 3 million innocent Cambodian people by the Khmer Rouge during the 1970s; arguably the most senseless and cruel murders in recent history. First I visited the infamous Tuol Sleng S21 prison. The exhibited photos of shackled prisoners dying were horrific. 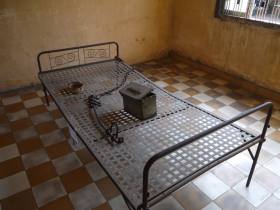 Out of 20,000 prisoners only 7 survived and I met one.. Mr Chum Mey, now 85 years old who was only allowed to live because he could mend the typewriters that his captors used to record victim’s ‘confessions’. His wife and 4 children all perished. 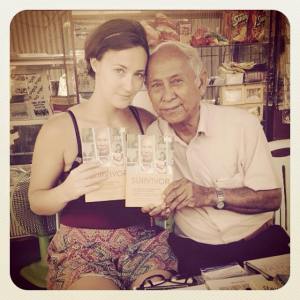 One place you must visit in Cambodia is the Cheung Ek Killing Fields. Millions of people died here and to ignore it, is to ignore Cambodia’s loss and its identity. I found the Killing Fields to be a surreal place where death and thriving nature coexist. Breezy green grass covers mass graves and although the site has been excavated, rain still brings rags and bones to the surface. It’s so eerie yet chirping birds and fluttering butterflies fill the silent air. 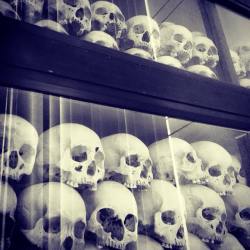 The Khmer Rouge didn’t give their victims the clean death of a bullet, they cost money.. so they beat, hacked and decapitated people instead. There is a memorial where the skulls of thousands are stacked as a stark reminder of what happened here.

The worst thing to be found in this undignified cemetery is The Killing Tree, a large sturdy oak tree that the sick regime used to murder children by swinging them against it to smash their skulls. Newborn babies were ripped from their naked mothers who were utterly helpless to stop their babies being bludgeoned to death and thrown into a pit. The tree was found by a local man covered in blood and brains and he blew the whistle on the atrocities.
The tree is now covered in bracelets of every colour left by tourists as a mark of respect.

I wish I’d brought a bracelet to give but instead I bought a flower and an incense stick to lay outside the memorial. It was definitely a once in a lifetime visit and I’m glad I saw it.

Diana & I squeezed in a visit to the Royal Palace, but initially they wouldn’t let me in, even though I had a scarf to cover my cleavage. Diana lent me her hoodie to save my modesty, but the heat was unbearable.. I spent the next hour sweating like a nun on the beach! Top tip for women, scarves are not always deemed suitable cover up, take a long sleeved top.

That evening was spent, once again, chilling at the backpacker’s rooftop terrace with the girls, sharing stories and drinking baby Guinness mmmmm.     Our guide was Cambodian so he took us to his dad’s ‘Crocodile Farm’, which was actually a back yard swimming with huge green crocs! Standing above the man eaters on a rickety wooden platform did not fill me with confidence for my safety but it was a impressive sight to see nonetheless!

Siem Reap and Angkor Wat
On the long journey to the next destination, my bus stopped at a place selling drinks and exotic snacks including fried ants and tarantulas. I tasted some ants (crunchy) but I drew the line at munching on a tarantula, instead opting to hold a live one. The hairy beast ran up my arm; but I never freaked out.

Travel has this awesome way of making you push your own limits and try things you would never do back home. I experienced a lot of begging in Cambodia, or kids just follow you and ask you to buy their wares. I bought some fruit from one little girl, I paid her and walked away. She insisted that she needed my watch for school. I felt disheartened at her audacity and said that I needed my watch but she pressed on. It’s indicative of their poverty that Cambodians have to beg and harass tourists.

I was fairly glad to move on to Siem Reap, a town similar to Phnom Penh but with a more touristy vibe. Siem Reap is a party town with a whole district called ‘Pub Street’ devoted to hedonism in the form of bars and clubs.

I had some great fun there dancing and meeting new people. There is a cool bar called Angkor What? It’s covered in neon graffiti and I met some right characters in there.

Siem Reap is the gateway to the iconic Angkor Wat temple complex made famous by featuring in the Lara Croft – Tomb Raider films starring Hollywood actress Angelina Jolie, who shone a spotlight on Cambodia in 2002 when she adopted her first child Maddox, a Cambodian orphan. 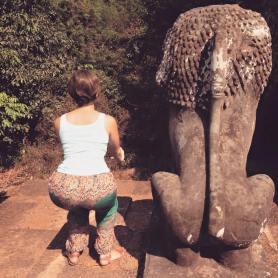 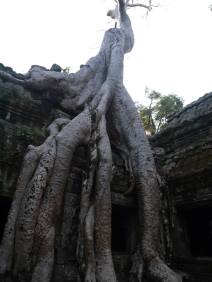 Angkor Wat is one of the coolest places I’ve ever visited; it is the largest religious monument in the world, first Hindu but now Buddhist. 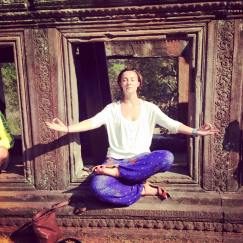 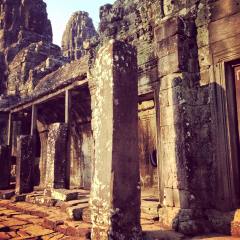 It is frozen in time and it’s magical charm set me off on my own little fantasy, that I was indeed a great explorer, and I spent hours wandering around on my own, getting hopelessly lost and climbing anything that I possibly could. 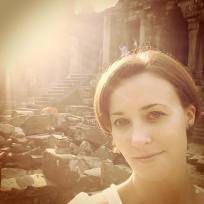 It’s so big that it took two full days there to see its wonders. Top tip: arrive at dawn to watch the sun slowly rise over the majestic silhouette of the main temple.

So, I’d done a month long whirlwind trip travelling across the four countries of the Indochina loop and lived to tell the tale! 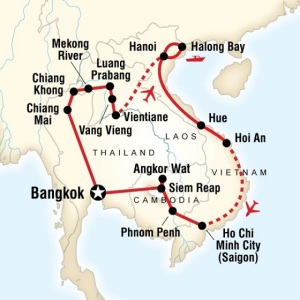 I had one more night in Bangkok to say sayonara to my group and part ways. I had a nice glass of wine with Emma and watched the sun set over the city. 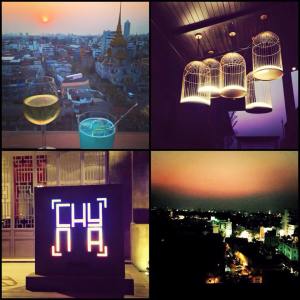 I was looking forward to two full weeks in Koh Tao that were to be spent fully alone, unescorted, unsupervised and full on solo yolo! I’d seen many beautiful and many thought provoking things. I’d taken every opportunity that came my way; including kayaking, abseiling, tunnelling, cycling, motorcycling, riding elephants, swimming in cold waterfalls and holding live animals including pythons, bees and tarantulas (sadly still no tigers) Koh Tao was all about scuba diving and I was about to immerse myself in that world and find some true grit along the way.

Find me on Social Media