I continued my growing love affair with Vietnam. Hoi An is absolutely beautiful and it trumps Luang Prabang (in Laos) for fabulousness. It’s neatly sandwiched between the Thu Bon River and the South China Sea. They call it the town of lanterns because every inch of this town is covered in bright jewel coloured lanterns strung across streets, restaurants, shops and bridges. At night-time the river reflects the lanterns like a rainbow of stars. It’s romantic and dream like.

During the daytime, Hoi An is a plethora of ochre hued buildings framed by dark teak shutters. Every shop is a treasure trove of beautiful tailored clothes, silver jewellery, antiques and hand painted art. The tailors here are world renowned, you can show them a photo of any dress or garment and they can recreate it. I didn’t buy any clothes; instead I chose to invest in a unique piece of art by a local artist. It was a real pain to get my painting back home to the UK via Cambodia and Thailand; but well worth it as it’s something I’ll treasure forever (and thankfully can’t be bought in Ikea!)

I’d been spending a lot time with my new pal Emma, she likes to party, so we partied hard together! I’d ditched my group to a large degree, because most of them behaved like a herd of sheep and I am not a sheep, I’m a tiger! My mentality on this trip was YOLO – You Only Live Once! So I did exactly as I pleased and wandered with abandon. 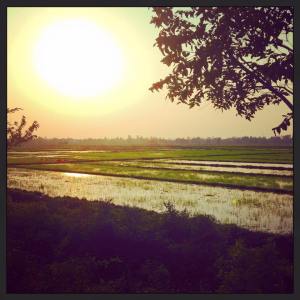 The beach was gorgeously unspoilt with golden sand and a palm fringed coastline. The South China Sea was choppy with strong waves that produced that timeless surf sound. 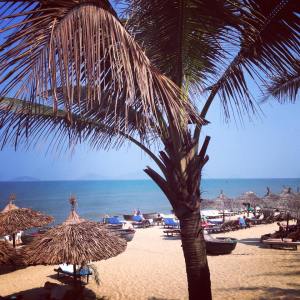 We relaxed on sun loungers absorbing the warm sun and read our books, then dined on whole crab and sipped on delicious fresh coconuts. I later walked past the crab tank and felt a twinge of guilt when I saw the poor little live crabbies waiting to be picked for the steam pot. I bravely stroked a couple of them and they jolted up looking at me with angry eyes unable to pinch me. I love all of Gods’ creatures… but I love meat and fish more mmmm.

Beach time was a welcome rest after so many tiring travel days. However, the return journey descended into a nightmare when we got hopelessly lost, racing to get back before the sun set (we had no lights on our bikes and no helmets) the 20 minute ride turned into an hour and a half of riding into nowhere with thundering lorries beeping at us. Fortunately Emma got us back and we ended the day partying with the international backpacker set at Tiger bar, one of the best bars in Hoi An. 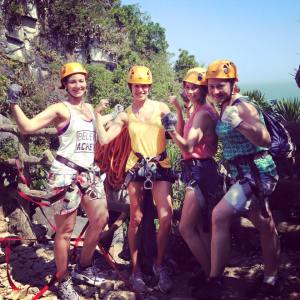 One of the most exciting activities I did whilst in Hoi An was abseiling with Emma, Diana and where I met Spanish beauty Raquel; who later found me in Koh Tao. We booked this excursion through our tour guide. A minivan picked us up and took us to nearby Marble Mountains, a cluster of hills made from marble and limestone. We geared up in harnesses and helmets and began a slippery climb to see the fantastic ocean view, then to start our first descent. I volunteered to go first as I’d abseiled a few times before and I knew the potential panic that some people experienced. The drop went straight into a dark cave; there was zero visibility so it was a case of listening to the instructor and making a backwards jump into the unknown. (Not to get too philosophical but it’s very much like life itself, if you’re brave enough to take a leap of faith, you’ll reap the rewards). Next, we descended down a 25m sheer cliff face in front of gawping tourists who clapped and cheered, followed by a wee inducing 50m descent into another cave. My top tip is don’t look down when you’re at the very top! It was shit scary but I always love getting an adrenaline kick; so I was buzzing. 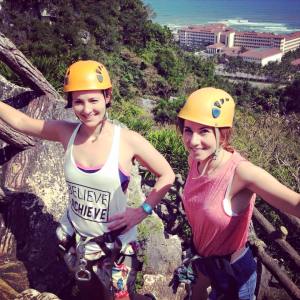 The most incredible Buddhist sanctuary lies in a cave underneath the Marble Mountains. When I happened upon the entrance, it took my breath away and I had some kind of spiritual experience in there. Honestly. Beams of angelic sunlight shone down from the roof casting light on the temple and it’s giant Buddha. Photos do not do it justice. I urge you to go there if you ever have the chance.

My time in Hoi An was full of laughs and smiles and positive vibes. I felt so calm there and it’s a place that I hope to go back to one day.
Ho Chi Minh City (formerly Saigon)

The city Saigon was a bit of a culture shock after peaceful Hoi An. I was met with a sprawling metropolis of endless retail and commerce, from markets selling cheap tat, to high end designer shops. In truth, I wasn’t enamoured with Saigon, our guide took us to see some buildings of note and a crappy market. I just couldn’t understand why we were staying for three whole days. As per my previous posts, the downside of joining a group tour is the lack of autonomy you have with your travel itinerary. It’s much better to wander with abandon.

I was experiencing a few low days during my stay in Saigon. My guide clearly disliked me, I had marginalised myself from the group and their disapproval was obvious. For the first time I felt lonely and badly needed a hug. I’m sharing this to keep things real, travelling solo is hard. 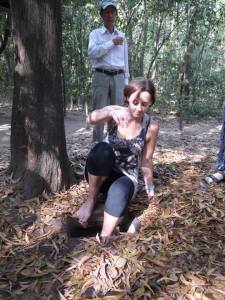 I learned so much about Vietnam and the war by going to see the fascinating Cu Chi tunnels, a complex underground network of narrow tunnels used by the Viet Cong to fight the South and the U.S during the war.
Our smiling guide Hai was a war veteran whose side lost. At 19 he worked as a translator for the Yanks and then rose up the ranks to become an officer. 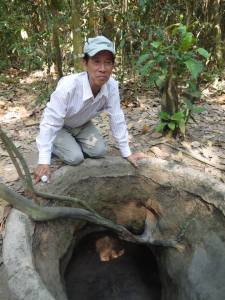 His stories were heart-breaking, he explained that the young Americans were drafted in, they didn’t know what they were fighting for and every day they cried to him because they were scared of dying. Hai told how he’d have breakfast with his friends and within a few hours they’d all be dead. Half of our group were sobbing during his stories. He then showed us various spiked traps, such an awful way to die. He was an absolute living legend and lucky to live to tell the tale. 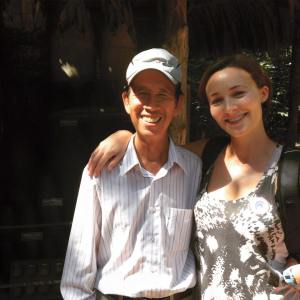 A few of us were given the opportunity to enter the tunnels. Now, I am massively claustrophobic, it’s my biggest fear, so this was a panic inducing challenge for me. But because I am persevering and bloody minded, I crawled through that tiny narrow stuffy hell hole on my hands and knees, breathing so quick and shallow, I conquered it though so I was proud of myself. 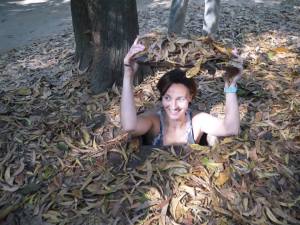 Another top place to visit in Saigon is the War Museum, where Chinook helicopters and imposing tanks stand next to B52s. There were harrowing photos of children disfigured by chemical warfare (agent orange) and I saw some actual preserved stillborn babies. It was sick and hard to look at, but I believe that you shouldn’t turn a blind eye on the horrors of this world. This is what Vietnam really went through and scars last lifetimes. 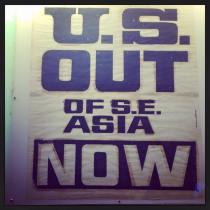 Thankfully that evening was more light hearted, I spent it sipping cocktails on the roof terrace of a sky scraper.. very cosmopolitan with a fabulous view of the city below. 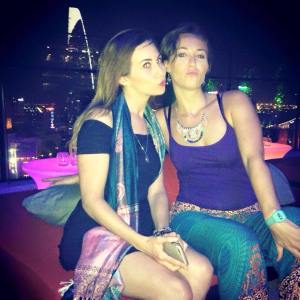 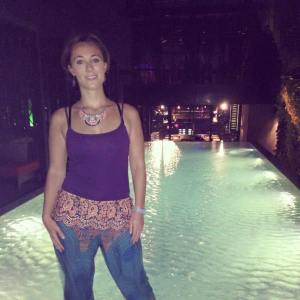 Emma & I went in search of the party scene to get our kicks but we ended up in a club full of Korean princesses. They looked immaculate in their designer dresses but they amusingly stand picking at fruit platters and don’t dance.. So we showed them how English princesses do it! 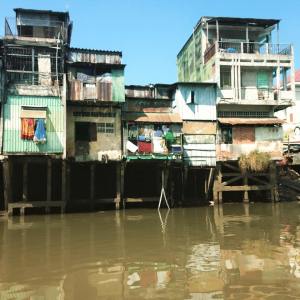 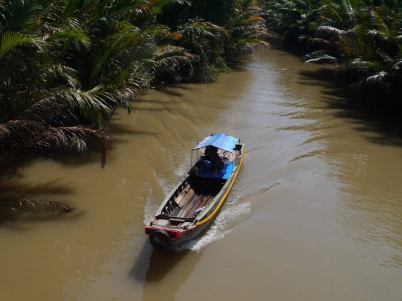 I pushed through my hangover and took a boat trip along the Mekong Delta to a scattering of river islands (Dragon, Phoenix and Unicorn). A local lady rowed four of us to Unicorn Island along a calm narrow pass covered with a canopy of ferns, it was a lovely thing to do and I’d highly recommend it. 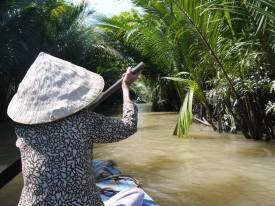 We visited a few local businesses on a horse and cart, listened to some serene singers, saw sweets being made and I held a honeycomb covered in busy bees.

But best of all, I got to hold a big Python (insert your own joke!) which wrapped itself tightly around my leg! Awesome. 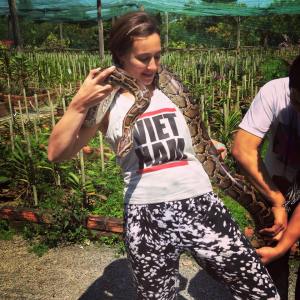 The last night in Saigon was my pal Farzana’s last on the Indochina trip so we went to watch an acrobatic show at the Saigon Opera House. 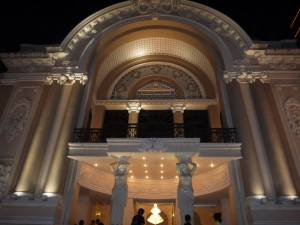 My time in Vietnam had come to an end but I took with me some amazing memories that shall last a lifetime and a desire to go back one day.

Find me on Social Media